There was no shortage of excitement for Schengrund Stables at the 2017 Morgan Grand Nationals! Under the direction of Legacy Stable, Mike and Liz Murphy, SSLLC Ironman (HVK Man About Town x One And Only) was a shining example of SSLLC breeding. Taking the reserve world title in the Futurity English Pleasure class, the flashy bay gelding impressed both the judges and spectators with his performance. This being his saddle debut made it all the more sweeter, talk about sitting on the edge of your seat! We are confident there are going to be tremendous things from him going forward. Many thanks to Mike and Liz and their amazing team at Legacy! SSLLC would like to congratulate the Foy family on their acquisition of this young star! We look forward to seeing him under the Cater Stables banner next year!

Not to be outdone by his half brother, SSLLC Imperial Command (HVK Man About Town x SSLLC She’s Got Legs) hit the ring shining and never looked back! This handsome bay gelding rose to the top with rider & trainer Amanda DuPont, Windward Farm, also coming out with roses from the World Champion Futurity Hunter Pleasure class. This dazzling guy proved he can compete with the best of them. A huge thank you to Amanda and her tremendous team at Windward! We look forward to seeing what is in store next show season!

A vivid reminder that when you purchase an SSLLC morgan the best is yet to come, we would like to recognize the recently sold SSLLC Flyte Tyme (DBA Street Talk x SSLLC Evening Edition) who did us proud at MGN with victory passes in both the 3 year old Classic and the Junior Classic championship classes with rider Kristen Johnson under the direction of David Rand.

We would like to thank all those who participated and supported SSLLC during the Morgan Grand National and World Championship Horse Show. Please take the time to check out SSLLC Imperial Command and other prospects on our “For Sale” page, we would love for you to be our next victory shout out on our growing list of champions! As for Schengrund Stables, we are preparing for foaling! 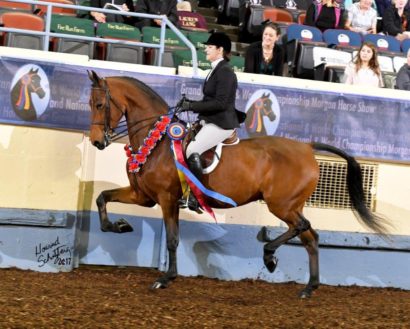 Back to the News page >